The When, Why, and How of Dethatching Your Lawn 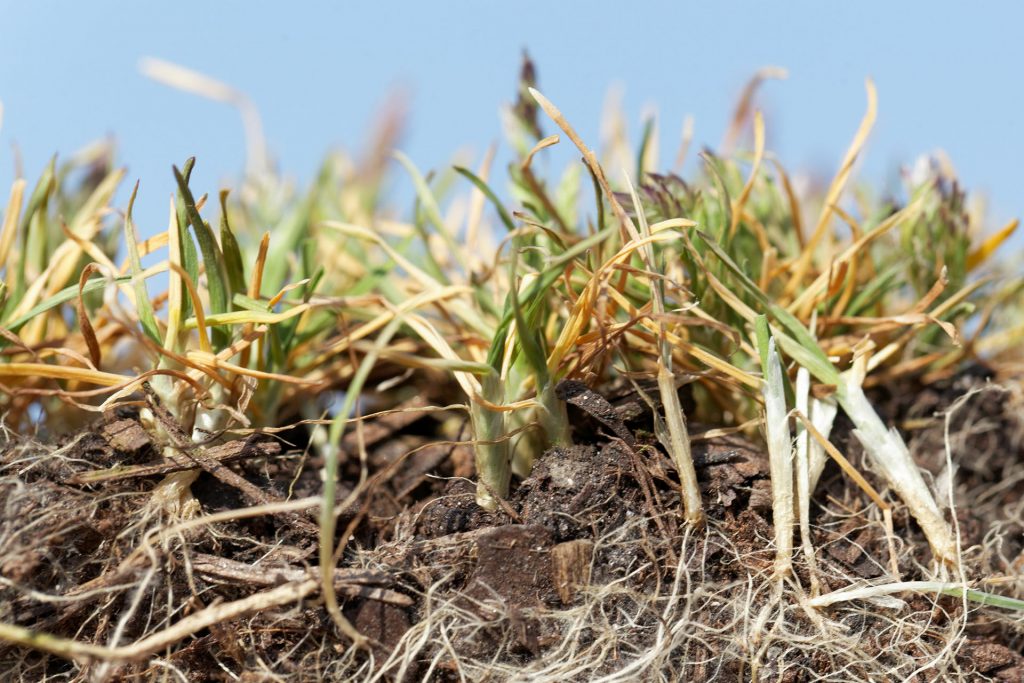 Thatch can be a healthy, useful part of your lawn. And not every lawn will need dethatching. But when thatch becomes too thick, it can inhibit healthy turf growth. When that happens, it may be time to dethatch. Dethatching can be a DIY project. However, if the thatch is really thick, it may be necessary to hire professionals to avoid damaging the lawn too much. No matter what you do, a lawn with thick thatch will need some significant recovery efforts after dethatching. 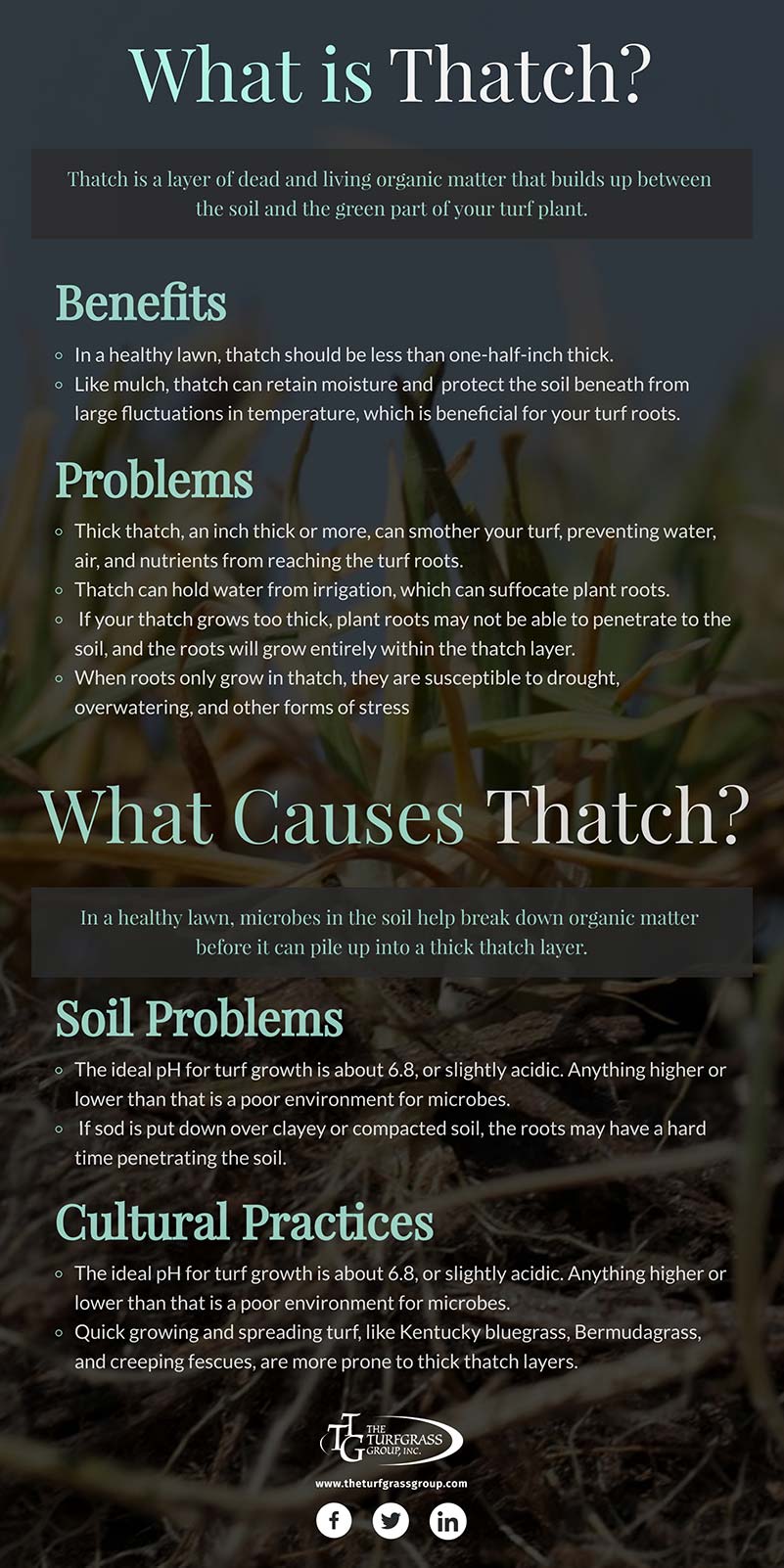 Thatch is a normal part of a healthy lawn. If you dig a spade into your lawn and pull up a cross-section, you will see where the thatch is. Thatch is a (hopefully thin) layer of dead and living organic matter that builds up between the soil and the green part of your turf plant. Contrary to popular belief, grass clippings do not contribute to thatch. They are mostly water and decompose quickly. But some materials decompose less quickly, and when the organic material starts to build up more quickly than it can decompose, it becomes thatch.

In a healthy lawn, thatch should be less than one-half-inch thick. This thin layer of thatch helps your lawn retain water, much like a layer of mulch. It can also protect the soil beneath from large fluctuations in temperature, which is beneficial for your turf roots. As long as the thatch remains thin, water, nutrients, and fertilizer can penetrate and reach the plant roots. However, when the thatch becomes too thick, it can begin to pose a problem.

Thick thatch, an inch thick or more, can smother your turf. It prevents water, air, and nutrients from reaching the soil below. And it can hold water from irrigation. When the thatch becomes saturated, the water can suffocate plant roots. The moisture also provides a welcome environment for fungus and other diseases.

Worst of all, if your thatch grows too thick, plant roots may not be able to penetrate, and the roots will grow entirely within the thatch layer. This leaves them vulnerable to both drought and overwatering, or any other form of stress. Once the thatch has grown so thick that the turf is rooted in the thatch, it becomes very difficult to remove it without damaging the turf. At a certain point, your only option is to dethatch you lawn. This will tear up the thatch and the plants growing in it. Afterward you may have to overseed or lay new turf.

Why Does Thatch Develop?

A thin layer of thatch is healthy for your lawn. But a thick layer can cause significant damage. Normally, organic matter should decompose at about the same rate that it builds up. This leaves your lawn in balance and prevents a thick layer of thatch. But some conditions may throw off that balance.

One factor in thatch growth is the health and condition of your soil. In a healthy lawn, microbes in the soil help break down organic matter before it can pile up into a thick thatch layer. But when the soil is dead or sterile, there aren’t enough microbes to break down the growing layer of organic matter, and the thatch layer thickens. Poor pH balance can contribute to poor soil health that leads to thatch buildup. If soil pH is too low, it may be necessary to add lime. Soil that is too acidic is a poor environment for microbes. Soil can also be too alkaline, with a high pH. The ideal pH for turf growth is about 6.8, or slightly acidic. Anything higher or lower than that will lead to a less healthy lawn.

Cultural practices can also contribute to thatch growth. Over-fertilizing with a high-nitrogen fertilizer and overwatering can cause the grass to grow too quickly. As the grass grows faster than the microbes can break down the thatch layer, it thickens.

Poorly laid sod can also lead to thatch. If new sod is not watered deeply, the roots won’t grow into the soil, leading to early thatch buildup. If sod is put down over clayey or compacted soil, the roots may have a hard time penetrating the soil, with similar results.

Some varieties of turf are more prone to thatch than others. Quick growing and spreading turf, like Kentucky bluegrass, Bermudagrass, and creeping fescues, are more prone to thick thatch layers. Grasses that grow more slowly and clump, like tall fescue or perennial ryegrass, are far less likely to need dethatching.

When thatch has become too thick, you may notice that the grass is thin and unhealthy looking. If there is a drought and the grass is rooted in the thatch instead of the soil, the grass may even go dormant. If the thatch is holding water, you may also see signs of disease and root rot. When this happens, the only solution is to dethatch your lawn.

Three tools may be used for dethatching.

After Dethatching Your Lawn

Dethatching can be incredibly stressful on a lawn and may pull up large amounts of grass along with the thatch. If your lawn is dying because of thick thatch, dethatching may be your only option. However, after a significant dethatching process, you will need to repair your lawn. This may mean overseeding or even laying down new sod.

Once you’ve repaired your lawn, it is time to develop a plan to avoid thatch buildup in the future. Thatch is often exacerbated by compact soil, so an annual aerating plan is a good place to start. Keeping soil loose and giving your turf roots access to air, water, nutrients will help their roots grow deep into the soil.

It is also a good idea to test your soil every three to four years to determine its pH and calibrate how much nitrogen fertilizer you need to give your lawn. By maintaining a healthy pH, you provide the microbes in the soil the best chance at keeping down thatch. And avoiding over-fertilizing will also help prevent thatch buildup.

Finally, adding hummus or other high-quality organic material to your lawn is a great way to introduce more of the helpful microbes that break down thatch and keep it from getting out of hand.