Are Pesticides Safe for Your Lawn? 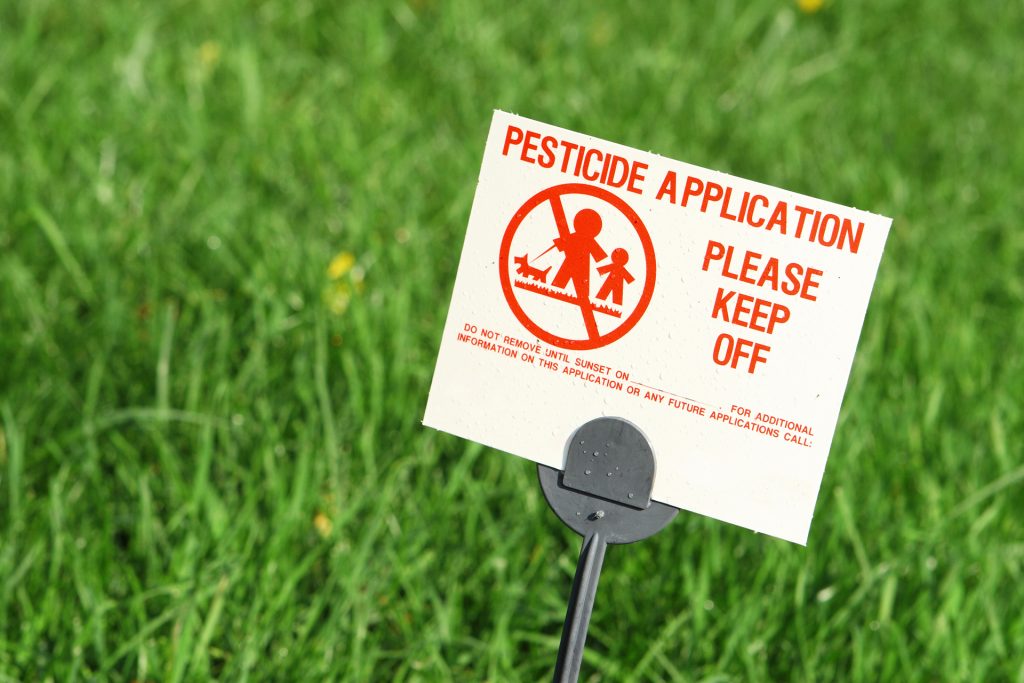 There is a lot of conflicting information about whether pesticides are safe for your lawn. On the one hand, pesticides are sold in every garden store and even some big box stores that sell food and other goods. On the other hand, there is a long-standing argument against pesticides, and that movement is only growing.

From the first arguments to ban Agent Orange to more recent concerns over GMOs and organic farming, pesticides have been a hot topic for decades. So it should come as no surprise that many homeowners are unsure whether pesticides are safe for their lawns. And while we can’t decide for you, we can definitely give you a lot more information to make the most informed choice you can. In the end, there are many legal and EPA-approved pesticides, and whether you use them is up to you. But you should know more about it before you decide.

The Argument Against Pesticides

There is a growing movement for natural planting, farming, and eating. So it is no wonder that the same principles have spilled over into the lawn care world. There is no denying that our world is too polluted, and adding more pollution to the mix is no good for anyone. Here are some reasons advocates say pesticides are not safe for your lawn.

Pollution from the industrial use of pesticides on giant farms has been blamed for polluting the air, soil, and water. Runoff is an especially concerning side-effect of pesticides, as harmful chemicals are swept into waterways where they can disrupt the local ecosystem and even get into drinking water. And some tests have shown that pesticides are present in human blood, urine, and even breastmilk. So it would seem that pesticides are a real problem.

Another argument against pesticides is the effect they have on plants and animals you aren’t targeting. For example, a recent drop off in the bee population has been blamed, at least in part, on pesticides. A bee die-off has dire effects on the stability of US food production since many food plants require bees for pollination.

There is also some evidence linking pesticides to cancer. While the science is not conclusive, there seems to be a positive correlation between certain chemical pesticides and rates of some cancers. In fact, the makers of Roundup, a pesticide that contains glyphosate, just paid $10 billion to settle a lawsuit alleging that their product contributes to non-Hodgkin Lymphoma.

A growing body of evidence suggests that many common pesticides, including those sold for use on residential lawns, are dangerous to humans. In fact, it is illegal for any pesticide to advertise as completely safe. Instead, the safest claim any pesticide can make is that it is practically non-toxic, the lowest level of danger associated with a pesticide.

Many pesticides suggest waiting 24 hours before walking on a lawn where the product was applied. Some say the lawn is safe in as little as one to two hours, as long as the product has dried. But evidence shows that traces of chemicals may be present up to a week after application. This is especially concerning for young children, whose developing nervous systems are more sensitive to harmful neurotoxins.

With all these claims about the dangers of pesticides, many health experts advocate for farms and homeowners to abandon the products altogether. They claim that the products are harmful and unnecessary, as there are other more natural ways of controlling weeds and pests.

The EPA and the Argument for Pesticides

Although there is a growing chorus of voices advocating the abandonment of pesticides, a similarly weighty body of evidence suggests there may be safe ways to use pesticides on your lawn.

The first and most significant factor to consider before deciding if pesticides are safe for your lawn is precisely how toxic they really are. No pesticide manufacturer can legally claim their products are completely safe. After all, they are developed to kill living things, if only plants and pests. However, the most common retail pesticides, contained in many weed and feed products, are labeled practically non-toxic. That is the lowest toxicity classification for any pesticide and means that there is very little danger to animals and people when the pesticide is used as directed.

Another consideration when selecting a pesticide is the risk-benefit analysis. While some people may worry about the effects of pesticides, they can also reduce some risks. For instance, pesticides can help control mosquitoes, fleas, and ticks that can spread diseases. So before you discount pesticides entirely, it pays to recognize the benefits as well as the risks.

While pesticides have their redeeming qualities, some homeowners want to do what they can to avoid them. We understand why homeowners would like to play it safe, so if that’s what you want to do, there are some helpful alternatives that can minimize your use of pesticides. Here are our top suggestions for beating weeds and pests without pesticides. 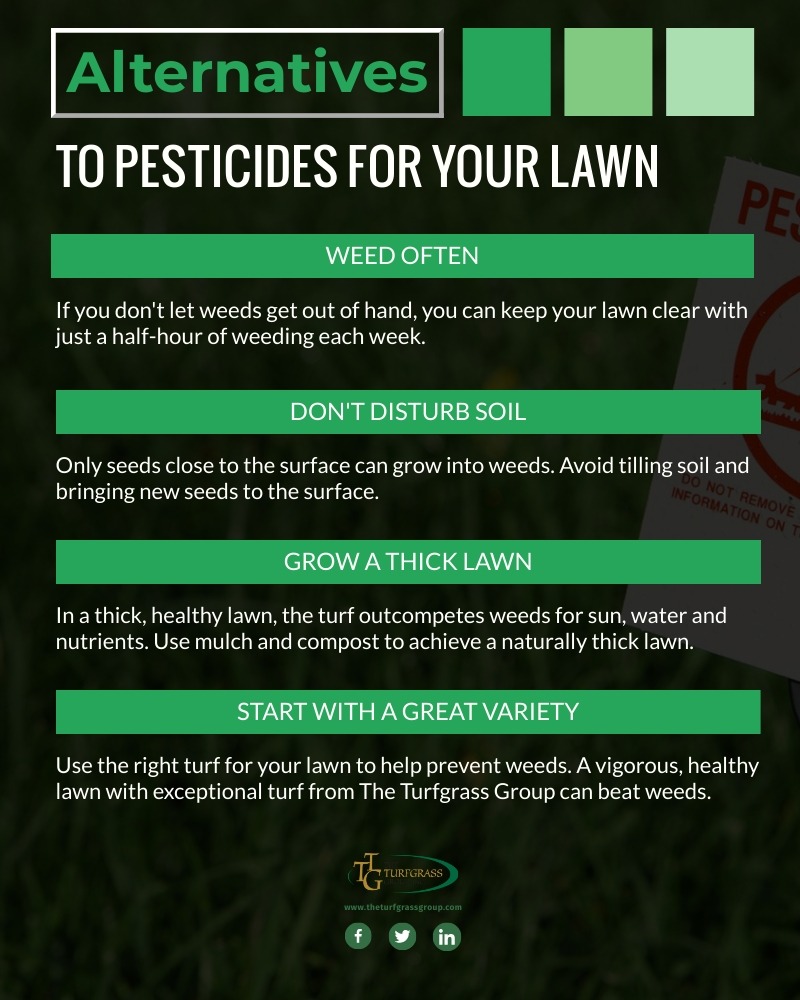 Don’t Let Weeds Get Out of Control

Some homeowners like to use chemical herbicides as a panacea for their weed problems. But you can avoid heavy doses of pesticides by staying on top of weeds as they pop up. No one loves pulling weeds, but it doesn’t have to be a herculean task. Instead of waiting for weeds to take over your lawn, make a little time to weed your lawn by hand each week. Just a half-hour of weeding can keep weeds under control without artificial help. If you get the weeds before they mature, they will be easier to pull up since their root systems will still be shallow. Also, try to weed after a rain or after you’ve watered the lawn. The wet soil will make it easier to pull weeds out from the root.

Avoid Turning Over the Soil

Weeds spread because they can send their seeds far and wide, either by air or other means. Your soil is probably full of seeds, just waiting for a chance to sprout into weeds. But only the seeds within a few inches of the surface will have an opportunity to grow. However, when you till the soil and turn it over, you give a whole new batch of seeds access to the water and nutrients they need to grow into new weeds. If you weed regularly and avoid turning over the soil, you will find weeds thinning out over time.

They say that the best defense is a strong offense. In the case of your lawn, a thick, healthy lawn will crowd out weeds and make it harder for them to take hold. There are plenty of ways to encourage a healthy lawn, including some simple and natural cultural practices. Leaving grass clippings on your lawn will return vital nutrients to the soil and create a natural mulch layer that smothers emerging weeds. In the fall, mulching fallen leaves with your mower can do the same. A little nitrogen fertilizer at the right time of year can also help.

One of the best ways to ensure your lawn is thick and healthy enough to edge out weeds is to use the right turf for your environment and soil types. The Turfgrass Group sells some of the best varieties out there, and each one is suitable to grow an excellent lawn. Find out more about our varieties on their individual pages, and when you’re ready, click here to find a grower near you.